Part 5 of my visit to Yale University Art Gallery in New Haven to see Odd Volumes, Book Art from the Allan Chasanoff Collection.

It was next to impossible to stroll through Odd Volumes completely silently. Quiet gasps, sighs, chuckles of delight and amazement, whispered exchanges with friends, etc. could be heard as could viewers' footfall, camera shutters clicking away and almost...almost...the wheels turning in the artists' heads.

I did the unthinkable and spoke to a guard about a piece. Even asked him which he favored. And promptly forgot his answer midst such inspiring work. 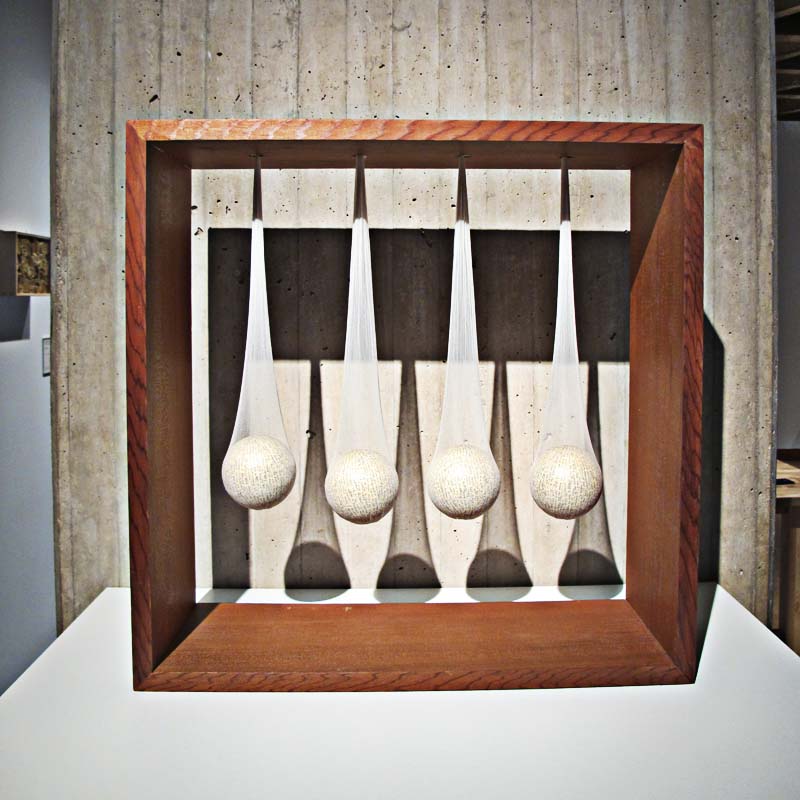 found and altered book pages with nylon,
in a wooden frame
Svea Seredin's Passing Down was one of the first pieces viewers saw after stepping into the gallery. What immediately struck me was the sheer graphic beauty of it - the whole it - including those stunning shadows. It's almost as if Svea created two works rather than one. When creating Passing Down, did she ponder the effectiveness of shadows, do you think?

The word spheres suspended so safely within the frame, nestled in their nylons, had me wondering if, at their center, one would find a wooden ball that had words layered upon it or if the spheres were created by layering and layering words upon words upon words. 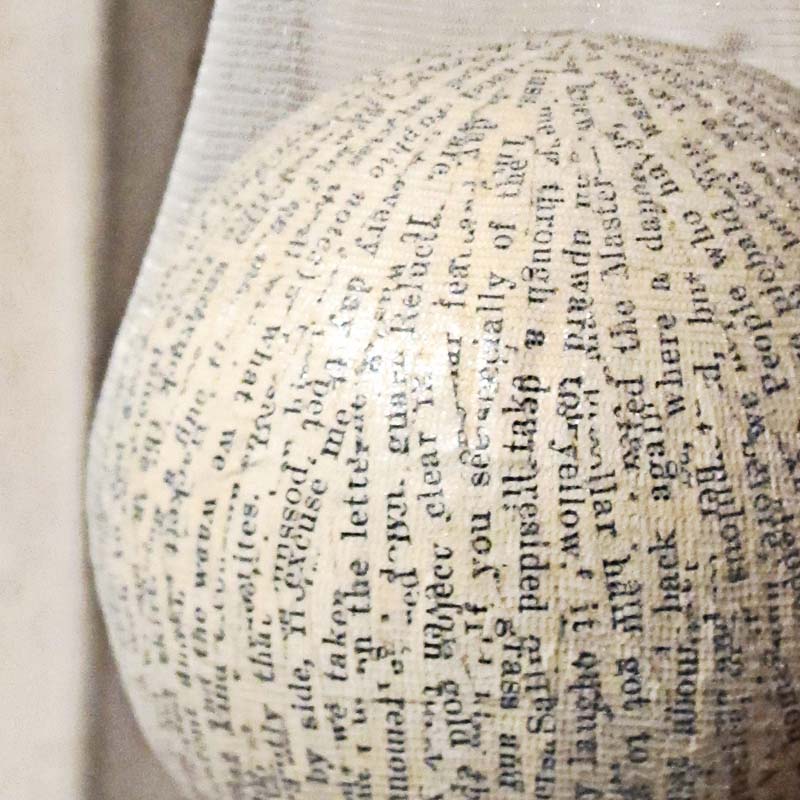 I yearned to crawl inside the nylon cocoons to see what stories were being told and hinted at. Or was it all just phrases, gibberish? 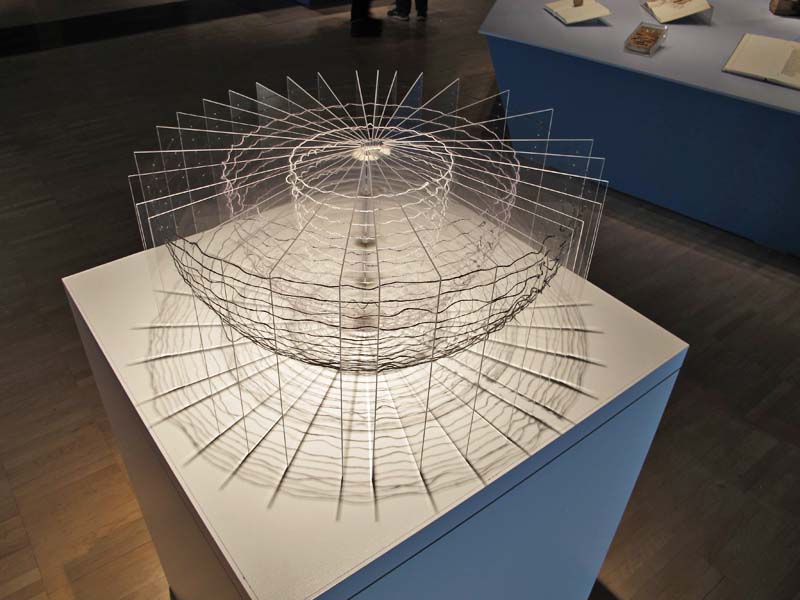 plexiglas with linen thread and binding

Adele Outteridge's Vessels caught my eye nearly the second I entered the gallery. It beckoned, teased and whispered to me from across the room. An ethereal siren of sorts. All shimmering light and shadows at first. I remember thinking that whoever had been in charge of lighting this exhibit was an artist in her/his own right.

The shadows fairly danced across the pedestal's surface while the light reflecting off the top edges of the (what seen from a distance I hazarded to guess was) plexiglas seemed to serve as a beacon. (like I said...siren)

Not knowing anything about the piece other than it is simply exquisite, it wasn't until I was about half way to it that I saw 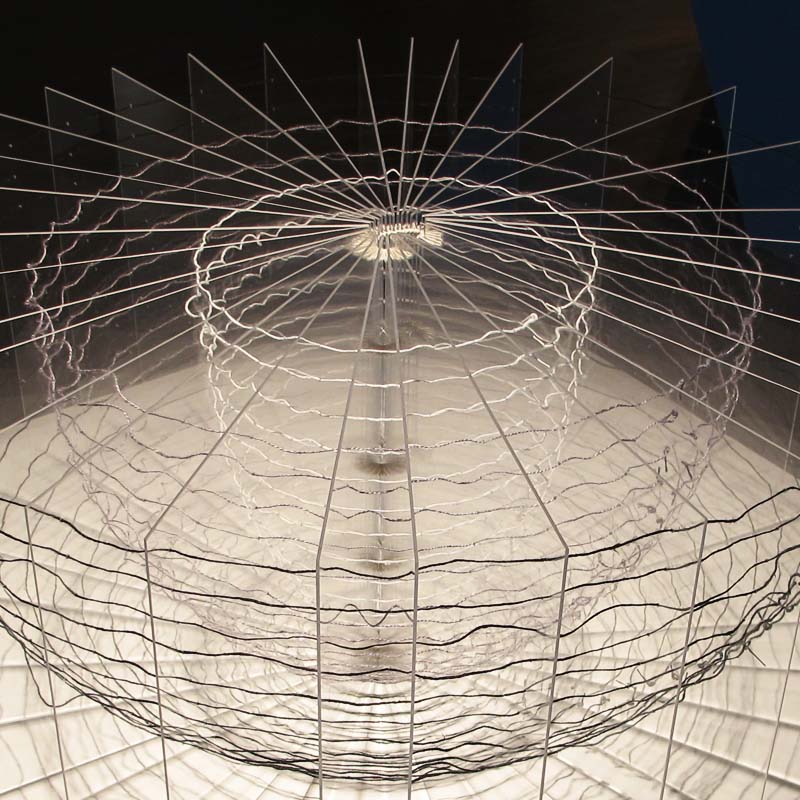 the center white vessel and began to see the surrounding black and gray vessels. Until then what my eye had seen and my brain had registered was line, light, shadow, black, white. But then I saw shape, creativity, artistry, exquisite simplicity and I could barely breathe. Thankfully, my friends were off looking at other works and so didn't notice that I was nearly crying. 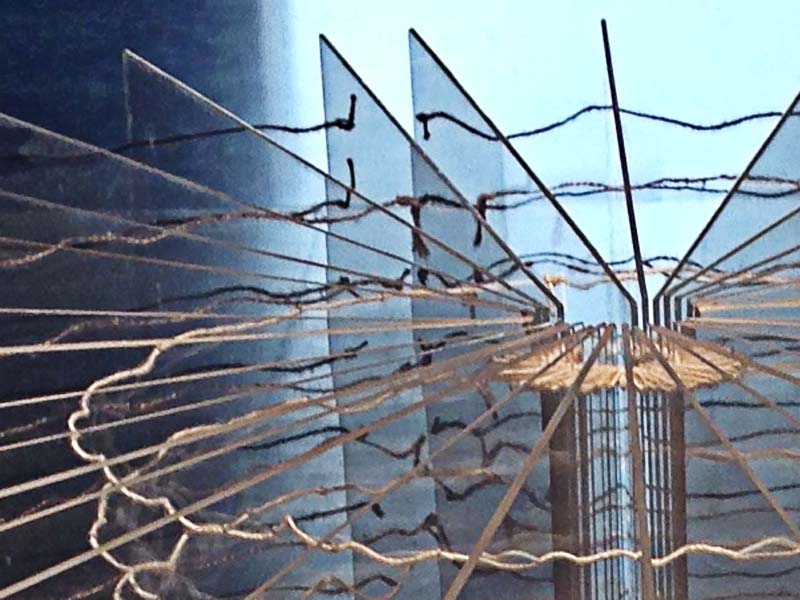 I laughed and broke a portion of the spell Vessels has cast over me, but only a portion. Imagine the views from the very heart of Vessels. Would it be disjointed? prismed? confining? or does it expand to offer you the world? I think it expands and increases your world. 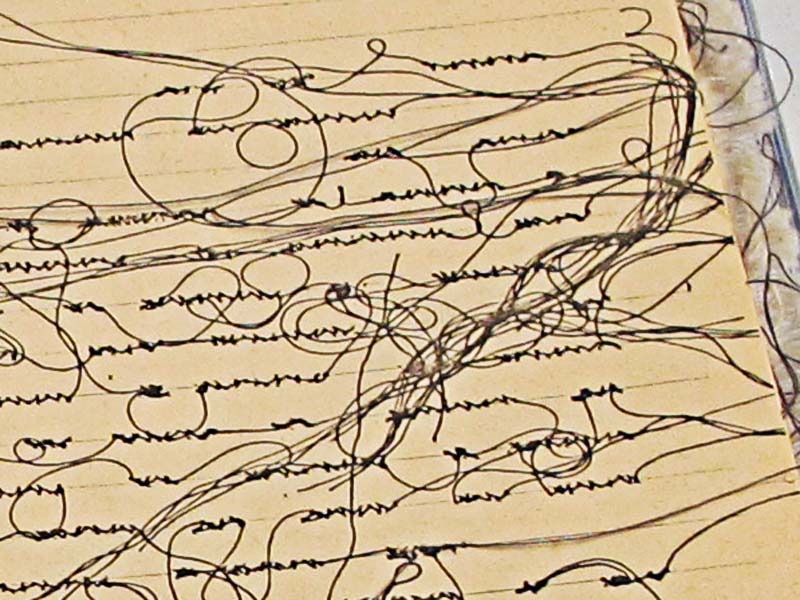 Hand-stitched writing that flows across and off the pages, trailing their ink behind. I would love to have been able to pick Book up, turn the page and see if any words are discernible. What was Maria Lai thinking about when she created this? 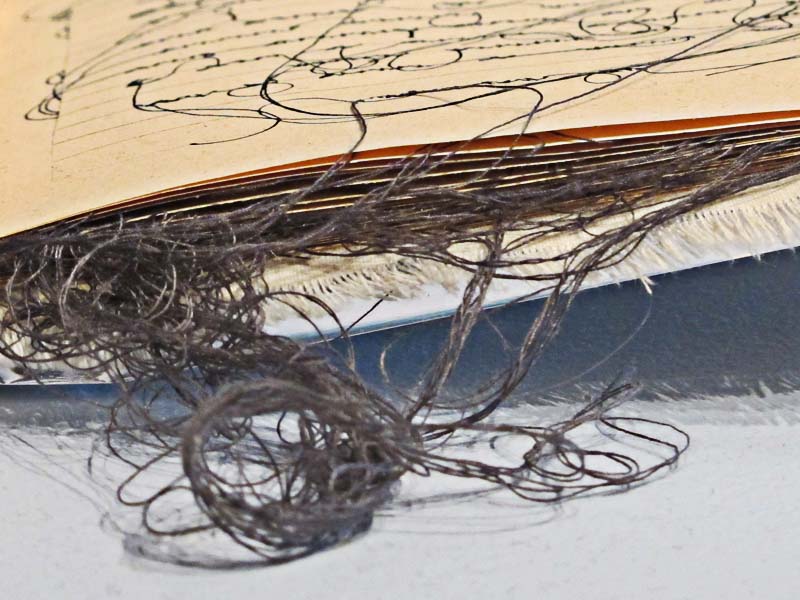 Maria Lai, Book, detail
Why did she choose to leave so much thread to tangle and entice? Book was created in 1979, but it is ageless in its artistry and appeal. Was asemic writing a conscience movement then as it is now? Do you know? 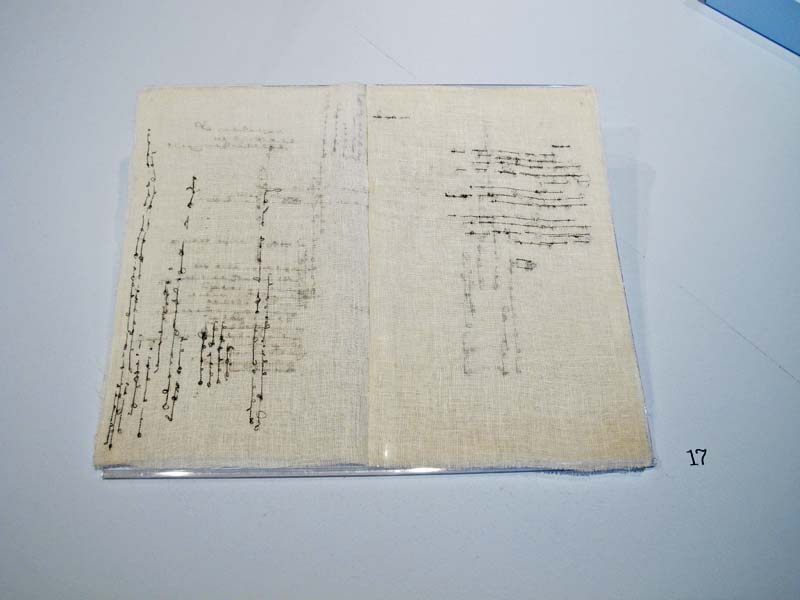 cotton gauze and pigment
Sylvia Ptak's Unbound was one of many pieces that were displayed in the center of one area on a rather large, low dias. With only numbers as identifying marks, one had to read an information sheet to learn the who, when and what of each piece. 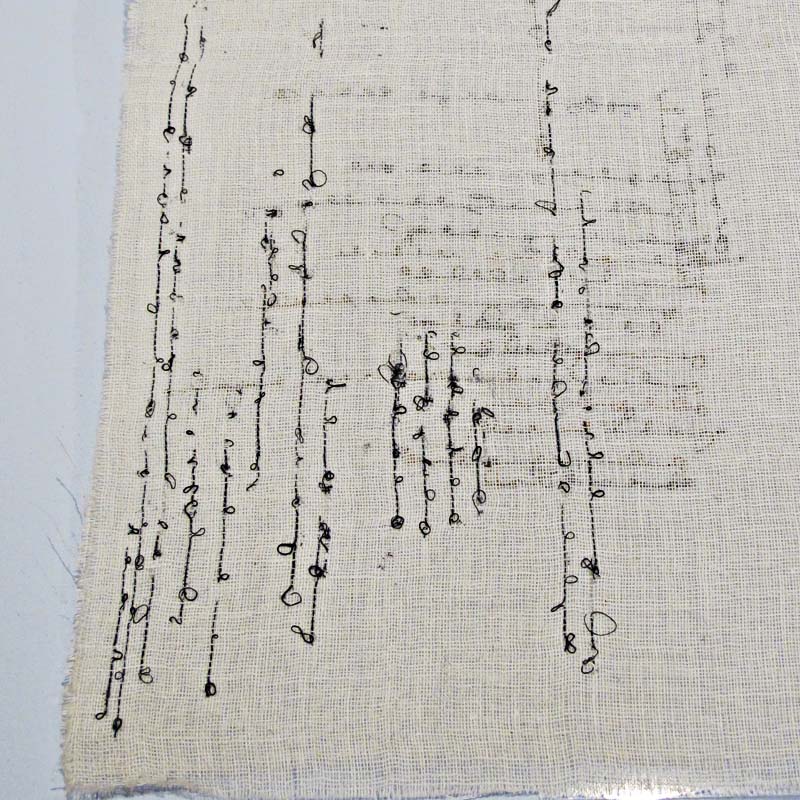 This was another work that I'd yearned to hold, feel the texture of the pages and the thread that Sylvia had used to write/stitch her words. 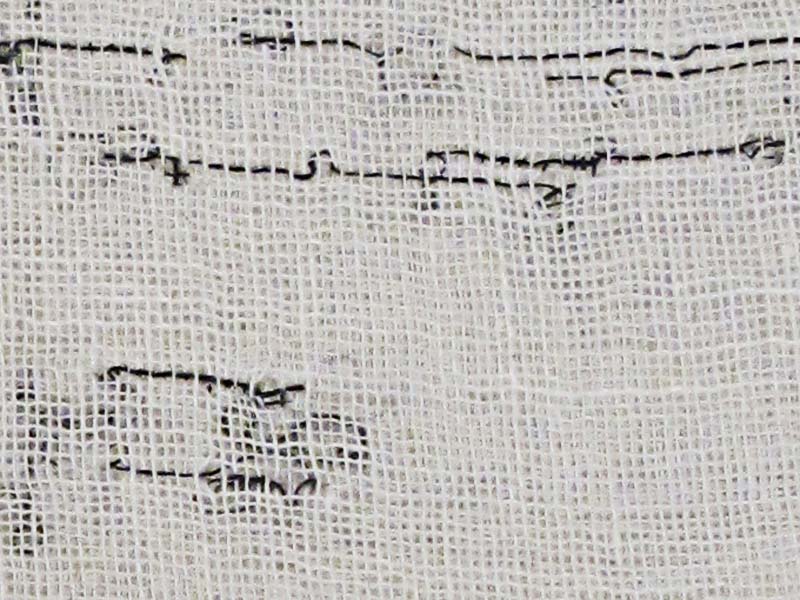 I don't mind admitting that it came as a great shock when editing the photos and copying the info about Unbound to learn that the writing is not hand-stitching, but the word-like shapes in the gauze works are created by pulling snags in the fabric to which pigment is applied. Although these shapes appear to be a familiar script, they are, in fact, indecipherable. (from David Kaye Gallery website, Sylvia Ptak page).

I nearly fell out of my chair. I'd seen this piece with my own eyes. Granted, it wasn't possible to get nose-to-book-type-close to Unbound as would have been nice to have a lovely inspection of the work, but I saw it. And had absolutely no idea that it wasn't hand-stitching that had been added to the gauze. Needless to say, I was flabbergasted and in total awe. 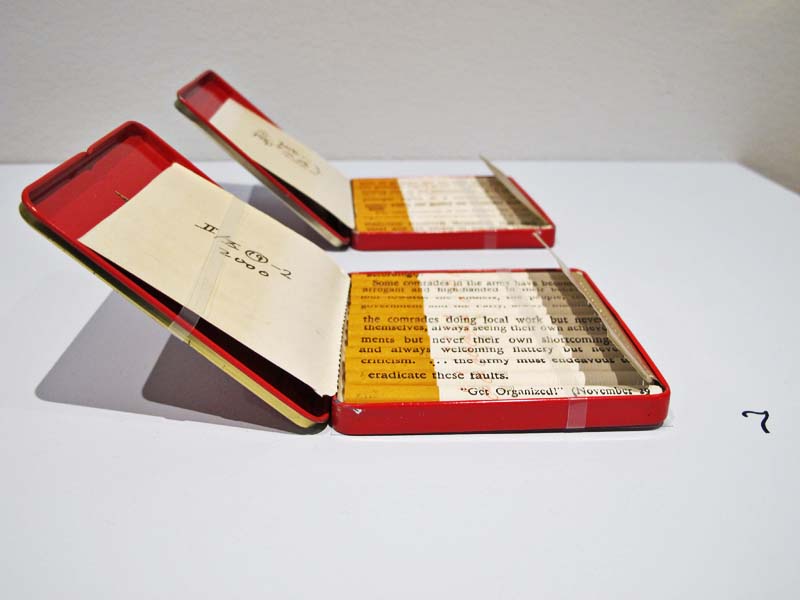 cigarettes with ink in two metal cases
I don't smoke...never have...never will...so what was it about these cigarettes that kept pulling me back to them? The red metal box + pale paper + the yellow tips of the cigarettes + black inked words = intriguing art. 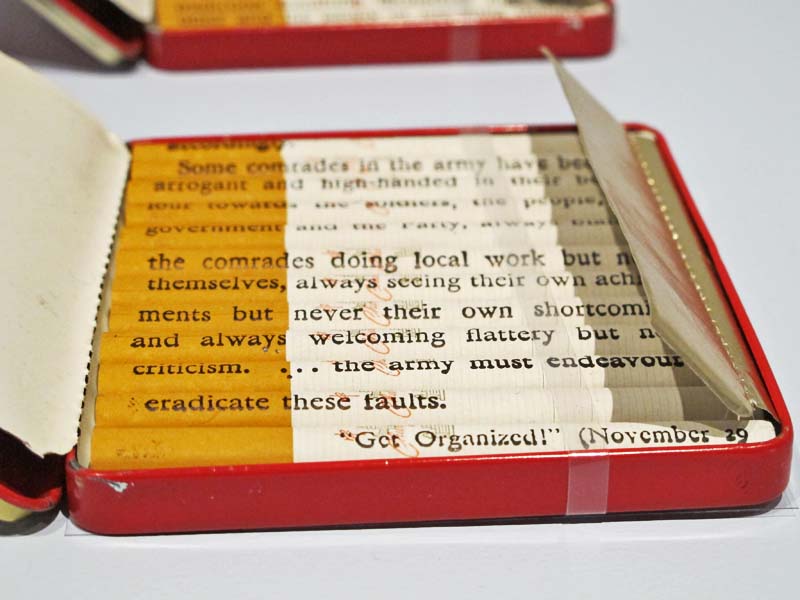 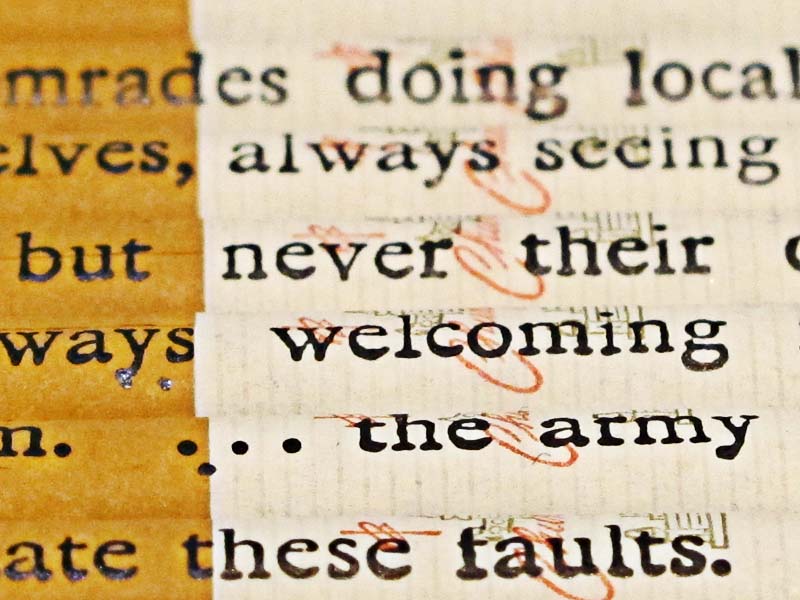 I wondered how much of the printing the artist had done...was it just the words in black? If I reached in and turned one of the cigarettes, would more words be found? Just how did the artist stamp the letters on so precisely? My photo is large, but the cigarettes were normal size.

I walked away from Red Book intrigued, remembering the graphic qualities of the work.  Again, it wasn't until editing the photos and typing out the info that the artist was revealed.

Pam and I first saw his work in a major exhibition in 2001. Word Play: Contemporary Art by Xu Bing at the Arthur M. Sackler Gallery of the Smithsonian Institution, Washington D.C. was such a stunning exhibition on so many levels. Mind boggling. Life altering. Unforgettable.

There was one area of the gallery at Yale that had yet to be explored. There was table full of books for touching, a few pieces on the wall 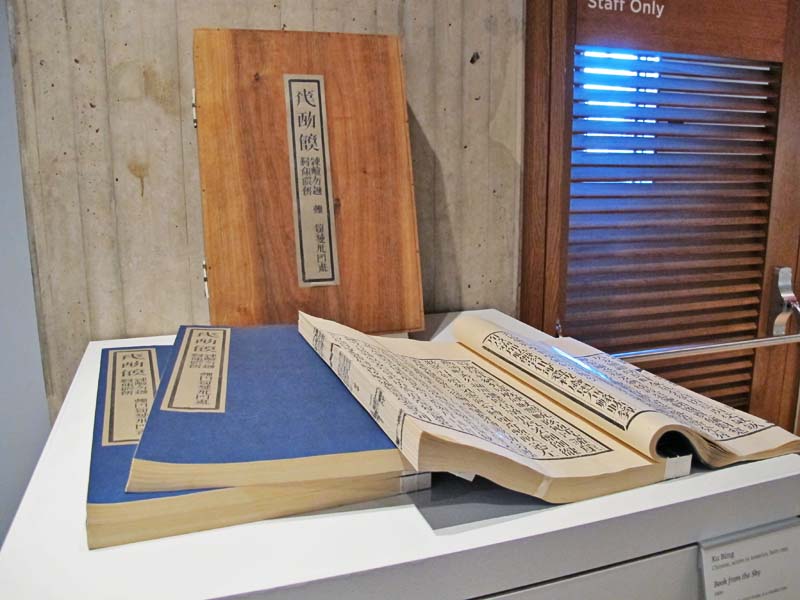 and a some books on a pedestal located between the fire extinguisher and a door. As I neared the books, I realized whose work they were. 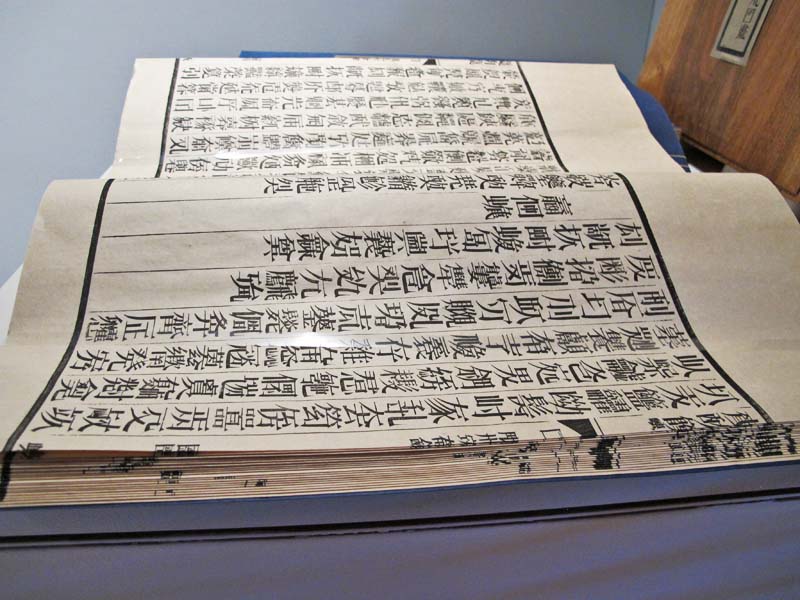 Four books of Book from the Sky - part of the exhibition that Pam and I had seen nearly 14 years ago and that I had viewed parts of again last year at the Metropolitan Museum of Art in New York.

There's no way to describe this work without including better photos than I was able to take at Yale. 2001 was a digital camera-less year - although somewhere in the basement there are several developed rolls of film of Word Play.

In 2014, however, my trusty little Canon G11 accompanied me on my visit to the Met. Seems I never got around to editing the photos of The Written Word: Book from the Sky. Stay tuned.

These were my favorites from Odd Volumes. I'm wondering...what are yours and why?

Again, I'd like to request that if you happen to post any of my photos of the work in Odd Volumes to another site (pinterest, tumblr), you take care to credit the artist and to give me photo credit as well. All photos were taken by me on January 29, 2015. Thank you!
Posted by Jennifer at 12:12 PM
Labels: art trip, artist's books, Odd Volumes