In between - that's what I feel like I am at the moment...in between. What? Here and there? A rock and hard place, perhaps?

No. No. All is well here. It's just how the universe has me feeling what with winter still holding on while spring tries to muscle her way in. We've projects around the house to start, but, well...starting can be so darned difficult at times. Getting that momentum going, you know?

So, I've been locking myself in the studio once the urchins leave for school. And that is good. 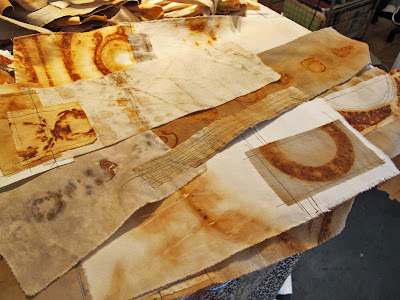 Sections of the next piece have been being sewn together and are waiting for more.

The past few days have been a frenzy of attempting to sew a pinafore apron out of my rusty cottons a la Christine Mauersberger's pattern that she was kind enough to share (Many thanks Christine!). 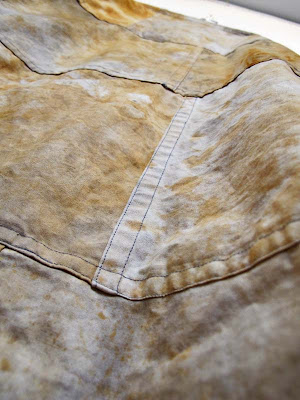 It fits, but needs tweaking - pockets are called for and it's a bit too long...or is it? The straps in back are a tad off somehow... I promise more photos soon.

Time in between has been spent applying to exhibitions and waiting for notification of acceptance or rejection.  I'm happy to say that 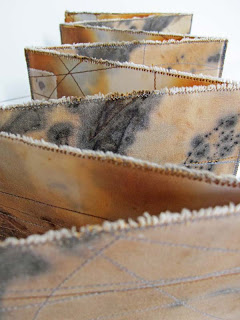 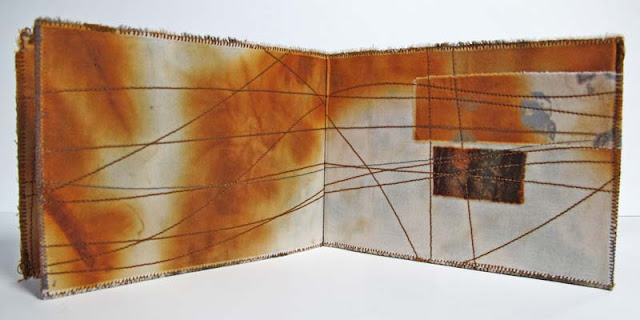 my collages The Scent of Tea Wafted Through the House, The Memory of Tea and The Making of Tea (all ©2012) will be part of Less is More: Small Works in a Great Space (A Mitchell Gallery National Juried Exhibition) , May 29 - June 19, 2013, at The Mitchell Gallery, St. John's College, Annapolis, MD.

Having my work accepted into exhibitions is a new occurrence for me. While I was juried into some of the best art shows along the east coast with my weavings, rarely were they accepted into exhibitions. Curated into by a curator who was familiar with them, yes, but juried into...no. So if you've been hearing the odd Woohoo! that can't quite be placed or get the feeling that someone is doing a serious happy dance (or 2 or 3) in the studio, that's likely been me.

All in all, this feeling of in-between-ness that has settled in has been quite productive for me. Of course, it could be a side effect of the allergy medicines that the allergist prescribed. This time last year, skull splitting headaches were a daily occurrence for me. Let's see...in-between-ness vs skull splitting headaches...not really a contest, is it?
Posted by Jennifer at 8:22 AM
Labels: accordion book, apron, Christine Mauersberger, collage, exhibit