When was the last time you had one of those Well, duh! moments? You know the kind I mean. The proverbial slap up side the head over some simple idea that you didn't think of. I had one just this morning while skyping with Pam.

My little urchins had their very first ballet recital last Saturday and, as all prima ballerinas do, received roses after their performance. 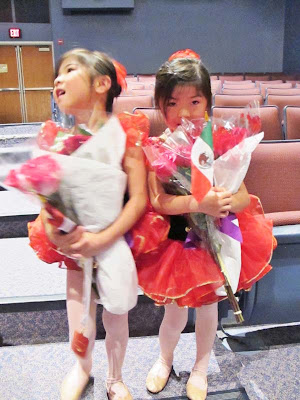 One dozen red roses and a half dozen pink roses each, in fact, which the girls insisted be put in separate vases once home. As the week progressed and the petals began to wilt, I popped them in a plastic bag and put them in the freezer.

So there we were this morning, Pam and I, in our respective studios, discussing the week, etc. I told her about the roses in the freezer and my plans to bundle them between sheets of paper a la India Flint, maybe even toss in a rusty bit for good measure. The hot plate would need to be located and a new pot bought first...and I'd have to figure out how to leave the hot plate on all night without burning the house down, etc. And that was when the Well, duh! moment happened.

Pam looks at me and asks why a crock pot couldn't be used. Oh, now, the snickering can heard, you know. For many of you, this is probably old news, but for me this morning it was a revelation. One of those earth shattering ideas that once said seems so simple, so...so...well, duh...a whydidn'tIthinkofthat?!? sort of idea. It definitely fits the what if category because I have no idea if it will actually work, but... 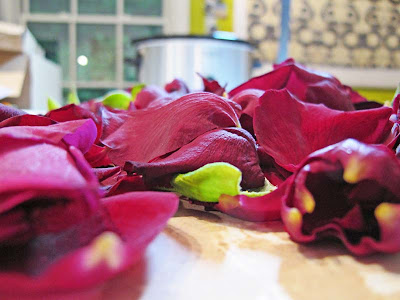 the roses were retrieved from the freezer. 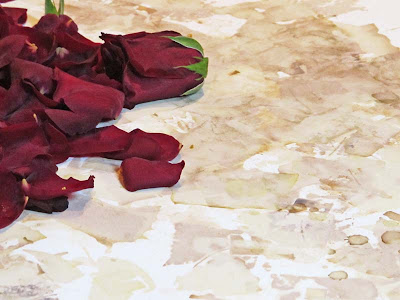 A piece of green tea dyed paper was cut into smaller pieces along with some plain white. 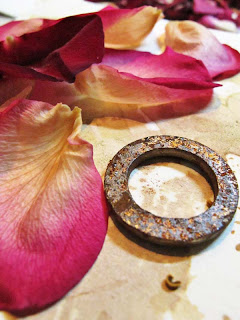 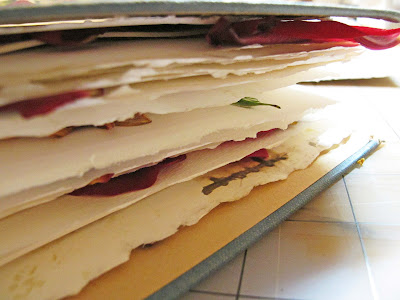 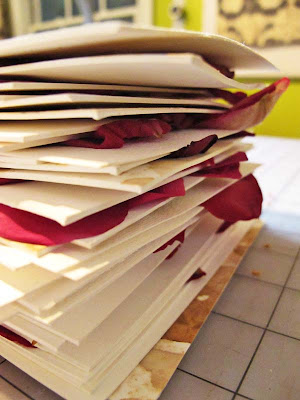 as well as a few rusted pages.

All were bundled and wrapped with the waxed linen threads that normally secure my rusty experiments and placed in the crock pot which is set on low. Fingers crossed that this actually works. I'll let you know in the morning.
Posted by Jennifer at 9:02 PM
Labels: bundles, India Flint, Pam, paper, roses, what if