Those of you who follow the blog have heard me mention my friend Pam. It's to her house that I escape for the artist retreats. And it's her that I Skype with on Fridays as often as life allows.

Life, however, has been throwing curve balls at both of us lately. Mine came in the form of the snow storm and power outages that plagued Connecticut for a week...or more in some towns. At some point, our curve balls have been family related. My charming little urchins have a way of frying my brain to the point where I wonder if senility is setting in early...when I can think coherently enough to wonder, that is. 52 is too early for senility, isn't it? Please say yes.

Back to the art stuff. Two lengths of discharged fabric hang on one display board while rusted cottons hang on another - both waiting for inspiration and/or genius to strike. During our most recent Skype session, I mentioned to Pam that I've recently become intrigued with the Japanese boro method of patching and thought it could be interesting to attempt a simple version of it with the discharged fabric.

I'm not quite sure at what point...or even why now...that I moved the computer over to show Pam the current arrangement of these rusted cottons, but she took one look at them and said, 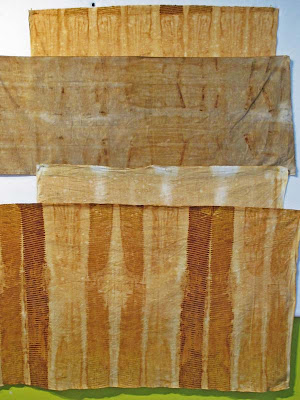 So I did. And that became this 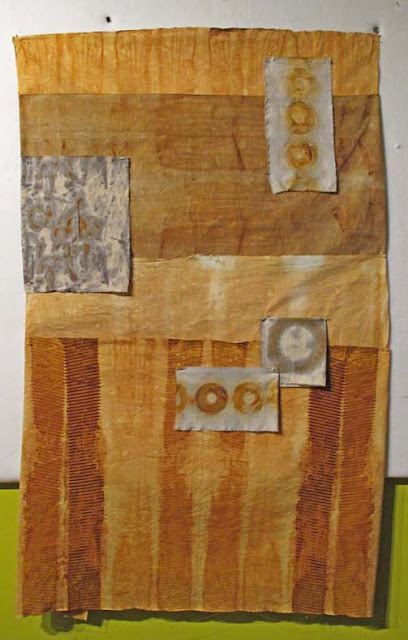 Can you see it? A piece? It's there. And to think that Pam looked at it for...oh...maybe 3 seconds before saying the magic words which took rusted cottons that have just been hanging around in the studio and transformed them into an actual piece of rusted boro cloth. There's work to be done, sure, but now there's a story to be told.

Pam worked her magic with the discharged fabric, and possibly even my Christmas cards, in the space of...hmmm...5 minutes tops. My snow storm and twin fried brain was amazed by it all. Hopefully the amazement will lift soon. After all, there's work to be done by Friday.

Posted by Jennifer at 10:42 AM
Labels: artist retreat, boro, crop it, Pam, rust