I seem to be having difficulty concentrating lately...which makes it a bit tricky to work on anything. Either my mind is running at top speed with too much info to process and contain or it's shutting down and refusing to work altogether...probably a result of being overloaded.

Then again, the lack of concentration could be due to spring (typed with fingers crossed) finally truly arriving and bringing with it a huge case of spring fever. Or it could be from anticipation of my upcoming trip to Washington, DC to gallery/museum/restaurant hop to my heart's desire. Yep. That sounds about right.

Despite my befuddled state, I managed a bit of studio time on Friday to work on indigo #7. Two hours later found the only alteration to the surface to be the holes left behind from my attempts at stitching. 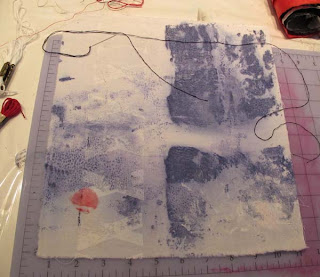